Women starting a family benefit most from the government’s low-income super contribution.

Women are the biggest recipientsi of the low-income super tax offset (LISTO). The number of females eligible for the tax break increases significantly around the time they start having children.

LISTO is a government superannuation payment of up to $500 per year to help low-income earners save for retirement.

Before-tax super contributions are taxed by the government at 15%. The low-income tax offset effectively refunds that tax for low income earners straight into their super fund.

You don’t need to do anything to claim the low-income tax offset. It happens automatically when people lodge their tax return, providing the super fund has a copy of the super member’s tax file number.

LISTO and the gender gap

AMP analysis over a four-year period revealed a significant jump in the number of women receiving the low-income super tax offset between the ages of 25 and 33.

Women were twice as likely to receive the low-income super tax offset than men. Although a high proportion of both men and women aged 18 to 24 were eligible for the tax offset, the peak time for men was age 19.

Of the customer accounts analysed, 15% had received the low-income tax offset. 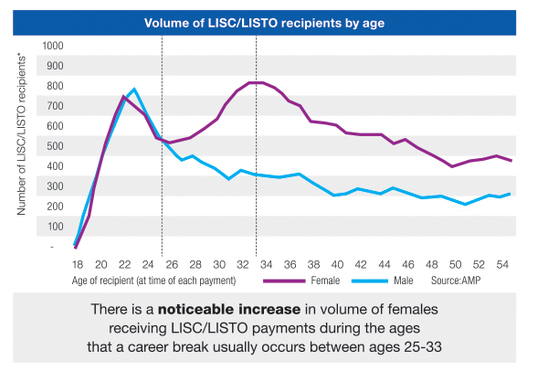 “We know women retire with less super than men due to a range of factors including time spent out of the workforce to care for small children, returning to part-time, often lower paid roles, where they haven’t had the benefit of pay increases and promotions.”

Owing to the ‘magic’ of compound interest, a $500 tax offset today could be worth much more over four or five decades.

“The more you contribute at an early age, the more likely your balance will grow over time, subject to market fluctuations.”

“These Australians have time on their side when it comes to saving into super.”

It’s never too early to get set for your future. Talk to us if you’d like more information about LISTO and other contributions that might help you and your family.

i AMP’s research and analytics team studied the data of 174,000 employed customers who had consolidated their super over a four-year period.

The secrets to early retirement